What makes neoprene such a popular synthetic rubber?

From the material used in leggings to the coating on your exercise weights, you can come across neoprene every day. But what makes this synthetic rubber so versatile and what industries have recognized its worth? In the following, we’re going to look into neoprene in detail.

Neoprene was the first synthetic rubber, invented in 1930 by DuPont company scientists, in response to the rising demand for natural rubber. Since natural rubber supplies failed to meet demand, scientists needed to come up with an alternative. Today around 300 000 tons of neoprene are produced globally.

Neoprene, also known as polychloroprene, an organic compound, is mainly composed of carbon and hydrogen atoms. It’s produced by polymerization, aka. linking together many smaller chloroprene molecules into long chains.

The end result is more resistant to waters, oils, solvents and heat than natural rubber, so it became an essential technology in the second world war. Actually, neoprene only got widespread in commercial use when the war had finally been over.

Properties made to last

The DuPont scientists have quickly recognized that this synthetic rubber resists degradation more than natural rubber. It’s very tolerant to extreme conditions such as heat since its burn point is at 260 °C. Its insulation properties are similar to those of rubber and solid plastic.

Although Neoprene was designed for its various oil and chemical resistant properties, Neoprene can also withstand burning and high temperatures. Neoprene is rated for operating temperatures up to 200°F, although it may stiffen. Neoprene does not begin burning until its temperature reaches 500°F. You can find Neoprene in fire-resistant applications such as fire door seals and firemen suspenders.

What makes it perfect for the automotive industry is that neoprene resists petroleum-based products, greases and oils and it also has a high tensile strength. It is an extremely chemically stable compound, withstanding solvent damage and handling adhesives well.

How are neoprene products manufactured?

Neoprene comes as a solid rubber or in latex form in rolls or sheets to the manufacturing plant, very rarely as a fabric. Then, it is moulded and extruded according to specific needs, and will take up any of these three forms:

Vulcanization will change its chemical and physical properties, making it heat resistant and more elastic. Vulcanizing neoprene creates one huge molecule out of the long chains, by bridging them with sulfur cross-links. Manufacturers can identify different types of neoprene by the number of these sulfur links and choose the one that meets the specifications for the job the most.

Where is neoprene used today?

Neoprene in the automotive industry

Due to its protective properties against vibration, you can find neoprene in the window and door seals of public transport vehicles. As for less visible applications, the automotive industry uses neoprene for CVJ boots, power transmission belts, vibration mounts, shock absorber seals, breaking and steering system components.

Neoprene in the construction industry

The construction industry benefits from the high tensile strength of the compound, as well as insulation properties and chemical stability. Similarly to the automotive industry, you can find neoprene used in window seals and gaskets, but it also does the job well for rather massive applications such as highway and bridge seals or bridge bearing pads. Apart from those, you can find neoprene as washers, bridge stay-cable anchor components, deviator pads, O-rings and elevator astragals.

Neoprene in the electronics Industry

Neoprene is a popular choice for cable jackets in the electronics industry. Jacketing in lead press cured mining cables, as well as in heavy-duty cables can be made from this synthetic silicone.

You can come across neoprene on several everyday objects even in your home. It’s commonly used as laptop sleeves, tablet holders, remote controls or mouse pads. If you like watersports, most of the gear including wetsuits is made of some kind of neoprene compound. It’s bubbles in a foam form come in handy when you’re under cold water. Recently, face masks are also being manufactured from neoprene since it filters out particles smaller than coronavirus. 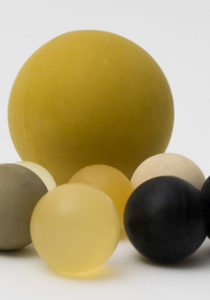 Neoprene rubber cleaning balls are suitable for separation equipment in dry operations. It is used for reference control of screened / transported material without interruption of operation. The use of these balls prevent the accumulation of the vibrating screen and possible “blinding”. By using screen cleaning balls, you can avoid unnecessary downtime.
Technical parameters: Neoprene creates a good chemical structure and creates flexibility over a wide temperature range. Has good resistance to oils and greases. In white design suitable for sifting or inspecting food products, eg oilseeds, a.k.a. FDA approvable. Working temperature: -10 ° C / + 80 ° C Also available with metal core for easier detection.

If you liked this article, please share it!
Read more news
Producing Rubber Beyond Imagination Since 1936
Tell us about the rubber part you need. We deliver it to you. Partner up with Sic! We reply to all enquiries quickly.
Submit your request

You can find out more about which cookies we are using or switch them off in settings.

This website uses cookies so that we can provide you with the best user experience possible. Cookie information is stored in your browser and performs functions such as recognising you when you return to our website and helping our team to understand which sections of the website you find most interesting and useful.

Strictly Necessary Cookie should be enabled at all times so that we can save your preferences for cookie settings.

If you disable this cookie, we will not be able to save your preferences. This means that every time you visit this website you will need to enable or disable cookies again.